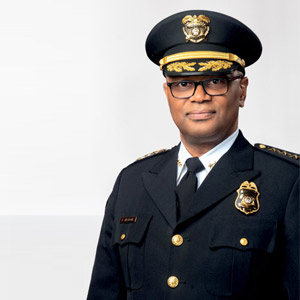 Ren’gia Majors enjoyed the things most 11-year-olds do. Full of life, she excelled at school and regularly pitched in to help her father at his church. Evan Majors called his daughter his guardian angel.

Life changed forever for the family on Feb. 2, 2018 when a motorist sped through the marked school zone in front ofSandtown Middle School in the City of South Fulton, Ga. The driver’s vehicle slammed into the car in which Ren’gia and her 11-year-old brother were riding with a family member. The force from the impact threw both children from the vehicle.

"I look for her to come in the morning to kiss me and she's not there," Evan Majors told a local television station.

The legislation called for the placement of speed detection cameras in all school zones within the city. Cameras went live in nine of the 16 zones in October 2019, but were shut down when the COVID-19 pandemic closed local schools five months later.

Thrilled with the safety program’s tremendous success, city
officials are claiming victory in the effort to make schools, students and the community
safer

As students returned to the classroom on a limited basis, officials re-activated the safety program in September 2020. In corresponding 30-day grace periods, violators received warning citations. Actual tickets, carrying fines of $100 for first offenses and $150 for subsequent violations, were issued following those warning periods.

According to data recently presented by Blue Line Solutions, which manages the cameras initiative for the city, the number drivers cited for speeding plunged from 38,315 to 6,917 – a drop of 82 percent across the school zones. Eight of the 10 active zones saw drops of at least 75 percent.

Also during the reporting period, overall traffic through the school zones declined by 18 percent – or just over 25,000 vehicles.

“Not only did we see a significant reduction in the number of speeders, we also saw far fewer cars traveling through our school zones,” Willis said. “The numbers plainly show our school zones – and our children – are safer because of the cameras. I can’t think of a better way to honor Ren’gia’s memory.”

The cameras monitor speeds and issue citations during the regular school day on weekdays. For an hour before and after students arrive at and leave school, a speed limit of 25 mph is in effect in all school zones. Flashing lights alert drivers to those times.During the rest of the day, drivers are required to follow posted speed limits, which vary among the school zones.

Being able to use technology to make the school zones safer has been a godsend, according to Police Chief Keith Meadows. Just shy of its fourth anniversary, South Fulton continues to grow services offered to residents as well as the resources needed to deliver them.

“One of the first complaints I got when I came in as police chief was speeding in our school zones,” he said. “We have 16 different school zones and it’s really important for us to understand that we don’t have a police officer to put in every one of those school districts.”

Thrilled with the safety program’s tremendous success, city officials are claiming victory in the effort to make schools, students and the community safer.

“Unfortunately, Ren’gia lost her life,” said Mayor William “Bill” Edwards. “But, fortunately, we gained some safety techniques in our community to save lives of other kids like Ren’gia Majors.”

What It Truly Means For IT Security To Bea Business Enabler

Policy is a Key Solution to Stopping Packaging Waste

Congestion-Driven Basis Risk, A Challenge for the Development of...